Visit Pacentro, one of the most beautiful towns in Abruzzo

Pacentro, the Most Beautiful Town in Abruzzo, Italy

Pacentro is a medieval village in Abruzzo, Central Italy, standing at 650 meters above the sea and surrounded by a panoramic view of nature and mountains.
This place holds a magic atmosphere, and there is nothing better than to spend a day here, while getting lost among the narrow stone-paved alleys of the town, admiring the architectural details of the pretty buildings and breathtaking views along the way.

Talking with the locals was stunning to get know that until 25 years ago this town was the poorest of the valley, and look at it today! Thanks to tourism, it has become a beautiful gem.

You should not miss visiting the Living Museum, or better known as ‘La Casa di Marlurite’. This is an old house where the 82 years old lady, ‘Mariurita’ lived until 1978. She lived an absolutly simple life of those days, without water & electricity, just with a chimney, her donkey and a bed made of corns’ leaves. Since her death, the house has been not touched, and everything is just as it was during her time.

This is the classic example of how the people lived those days, no joke. This is why many people decided to emigrate to other countries, especially in the USA to find better opportunities.

It is known by the locals as the church of ‘Santa Maria Maggiore’, dating back to the 15th century. The church has a beautiful white stone facade from the Majella mountain. In the later centuries, the side altars were decorated with Baroque style and, in the late 19th century the vaults and the flat ceiling of the central hall were decorated with ‘stucco’ made by Bernardino Feneziani from L’Aquila and the local Attilio De Chellis.

This is the most ancient castle of Abruzzo with its 3 imponent towers, (anciently were 4), which was built for a strategic purpose together with the fortified town.
You can visit the castle and enjoy a breathtaking panoramic view of the Peligna’s Valley.

Pacentro is also famous for being the hometown of Madonna’s grandparents. Did you know that? As I said before, many locals migrated to the USA and Madonna’s grandparents did the same. Probably, they were living surrounded by the same conditions as the house I showed you before.
Abruzzo has also been the setting for some famous movies. View the list on my blog post about the famous films made in Abruzzo.

For the adrenaline seekers, there is a brand-new 1 km long Zip-line, where you can rush through the air with breathtaking speed and view. No need to book in advance, just go there and enjoy the ride. In summer they are open the whole day from 10 am to 5 pm, in winter they might have restricted times. For info write the organizer an email at info@ziplinemajella.com or call +39 366 7279724 I’m not sure if they speak English, but you can send a WhatsApp message and they will be able to translate your message.

Not enough? Take a virtual tour!


The Best Events in Pacentro

It’s a barefoot race happening on the 1st Sunday of September.
The teenagers of the town go up to the hill in front, and at the sound of the bell, they run down the steep hill barefoot in honor of the Virgin of Loreto.

Usually occurring every 8th & 9th of December from 10 am to 10 pm: the town gets filled with many stalls with craft gifts, souvenirs, typical local products, hot drinks, and many other delicacies!
The nights are animated by live events and lovely Christmas decorations.
For more info, visit their Facebook page.

Savor the traditional Chitarra (guitar) made with a string tool that looks like a guitar… Sipping local organically produced Montepulciano d’Abruzzo Red Wine, surrounded in a medieval atmosphere, taking you back in time.
Make ‘Chitarra con pallottine’ (pasta guitar with tiny meatballs) at home with my 84 years Nonna Amina’s recipe.

Savour the best ‘Arrosticini’.  Tasty lamb skewers, cooked on a special charcoal burning brazier. Those are Abruzzesi’s favourite food. It’s hard to find the good ones, I spent over 7 months and went over 13 trattorie, gained 23 kg (one of the 3 isn’t true) before finding the perfect Arrosticini.
Join my unspoken foodie tours.

Formaggio fritto literally ‘fried cheese’ is a typical dish of Abruzzo. It’s made with a young cow cheese, dredged with a special batter, and then fried. So damn tasty! Do not miss it!

Truffles are the gold of Abruzzo! You have to savor them on top of some pasta, meat, or even have a truffled ‘formaggio fritto’ and end your meal with a ‘Truffle Gelato’.
Join our Abruzzo’s Truffle hunt and lunch.

Savor the local wild game of Abruzzo in a small family-owned restaurant. Courses might include wild boars, pheasant, deer & hare. Everything should be served with the king of the wines, the Montepulciano d’Abruzzo.

Abruzzo Saffron – The King of the Spices Did you know that we produce saffron in Abruzzo? It’s real, even the best chefs of the world source saffron from Abruzzo. Abruzzesi saffron meals range from the classic risotto rice to second courses with sheep, desserts, and liquors too. 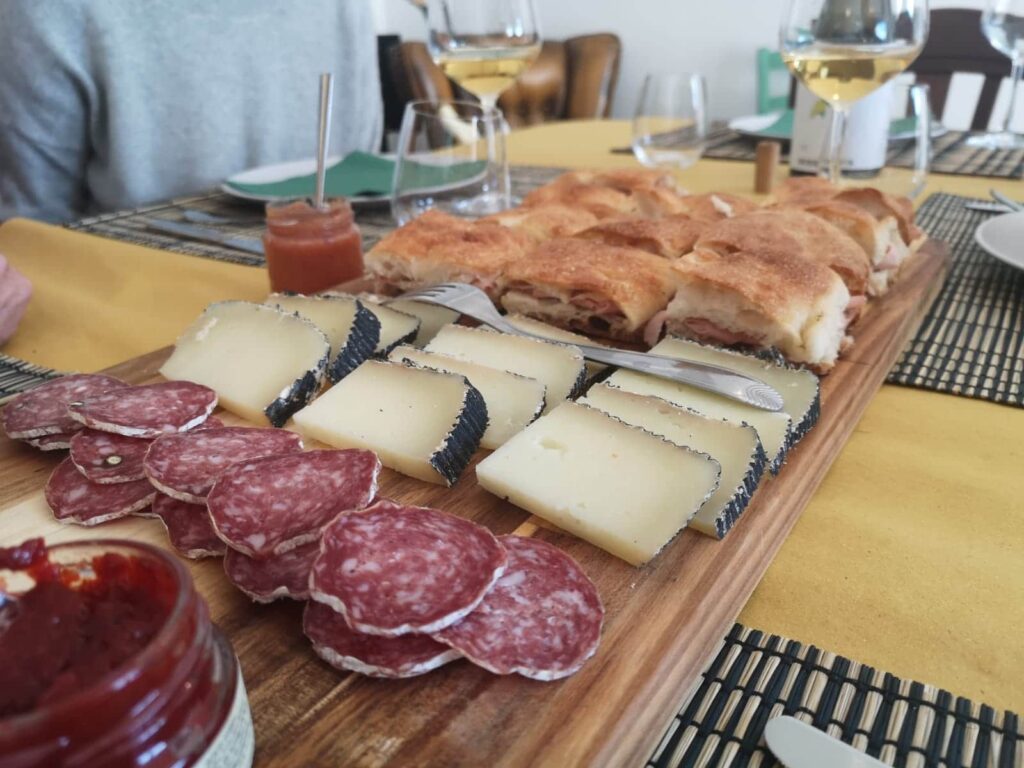 Ventricina, Prosciutto Nostrano, Salami & Pecorino Cheese, mortadella di Campotosto & Capilommo. Those are the Antipasti platter you must try if you’re in Abruzzo!!

Porchetta – The Queen of Abruzzo

4000 years old culinary tradition. Porchetta it’s a whole pig seasoned with garlic, pepper, salt, and rosemary. Then is marinated for 24 hours and slow-cooked for 8/9h in a wooden fired oven.
The crunchy crust on the outside and tender juicy meat on the inside

Vino Cotto is an ancient sweet wine, produced by the must of Montepulciano grapes. It is reduced by 1/3 in a copper pot and then blended with 50+ years old vintages. Following the same process as the balsamic vinegar. Best served after a meal with some homemade ‘biscotti’ or ‘cantucci’.

Those are just some of the typical products of the culinary tradition in Abruzzo. I hope this gives you an idea of meals & drinks to taste when you are here in Abruzzo.

Six towns you should not miss nearby Pacentro

This is the city of the poet Ovid, rich in history and traditional products like ‘confetti’ (almond coated sweets ), currently exported all around the world.

This lovely ancient village, where the time seems to stop. Scanno was named as the photographers’ town for the international appeal it has been receiving.
Don’t miss the Scanno’s lake with its heart shape, and to reach the photo spot you have to walk on the ‘love path’…walking through untouched nature habited by bears, wolfs, deers and other loving animals.

Another example of a medieval village, also in the network of ‘one of the most beautiful villages of Italy’. Protected by the Sagittario gorges with an impressive view of nature and other historic treasures to be discovered.

This town hosts one of the strangest festivals of Italy, the Snake Festival. For more than 350 years every 1st of May, the locals and these days also many tourists have been participating in this religious ceremony in honour of Saint ‘Domenico Abate’. The people carry the Saint’s relict covered with snakes on a procession descending the town of Cocullo.

A medieval hamlet situated in the heart of the Majella National Park. Famous for its sulphurous’ springs: here you can find one of the most exclusive thermal baths of Abruzzo. Highly recommended for relaxing and romantic moments.

Amongst the ‘one of the most beautiful towns of Italy’ network. Don’t miss walking around the alleys, visit the ‘Castello’, and admire its architectural beauties.
I also recommend you to visit the traditional Food & Folklore Festivals around the region of Abruzzo.

If you are looking for organising a trip to Abruzzo, please do not hesitate to get in contact with us.

Learn More about our available experiences and multi-day tours at ExperienceBellaVita.com

100$ for the entire spectacular Roccascalegna Castle in Abruzzo, Italy Previous Article Spreadable Sausages of Abruzzo Next Article
Book Now
[]
We use cookies on our website to give you the most relevant experience by remembering your preferences and repeat visits. By clicking “Accept”, you consent to the use of ALL the cookies. However you may visit Cookie Settings to provide a controlled consent.
Cookie settingsACCEPT
Manage consent