By Marino Cardelli on Sep 2, 2021
Wine & Wineries of Abruzzo

In this blog post series discovering the most genuine wineries of Abruzzo, today we’ve the pleasure to introduce you to the Cataldi Madonna winery in Ofena, province of L’Aquila in Abruzzo. The winery, is a point of reference for viticulture not just in Abruzzo, is a winemaking reality that makes a significant contribution to the assertion of high quality viticulture in the Abruzzo Region.

Four generations ago, the wine company was founded by Baron Luigi Cataldi Madonna in 1920. However, it was his son Antonio who first bottled in 1975. Luigi, his nephew, took over in 1990 and continued the family goal of defining the products and promoting the region. Today, the winery consists of 29 hectares (all planted with native and traditional grapes such as Montepulciano, Pecorino, and Trebbiano), all located between 320 and 440 meters above sea level in the municipality of Ofena.

The company’s activity is characterized by the pursuit of harmony in all aspects of its operations, both externally and internally, supporting the relaunch of mountain Abruzzo viticulture. In the vineyards, the objective is to maintain the varietal expression of the grapes, primarily by foliar apparatus control. Whereas in the cellar, the goal is to maintain in the wine,  its natural characteristics.

The Cataldi Madonna winery is located in the center of a natural amphitheater known as “oven of Abruzzo” in the municipality of Ofena.

An amphitheater shaped plateau at the foot of ‘Calderone’ the southern most glacier of Europe.  Sun, wind and other climate conditions make the site, one-of-a-kind convergence of natural elements, resulting in substantial fluctuations in day and night temperatures, which are truly important to the quality of the grapes. 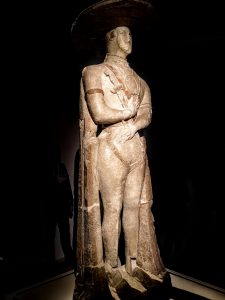 The Capestrano Warrior is a well known symbol for Abruzzesi, it represents the italic civilisation, living in this area since the 6th century before Christ. The statue was accidentally discovered in 1934 just a few meters away from one of the Cataldi’s vineyards, and since 1975 Antonio Cataldi decided to display the warrior on his wine labels.

All the wines are produced from native grapes varieties such as: Pecorino, Trebbiano & Montepulciano d’Abruzzo. 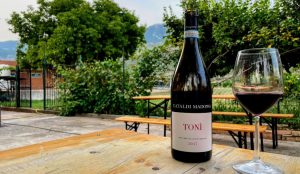 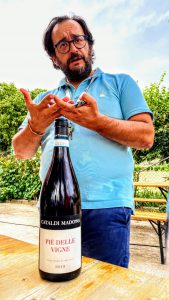 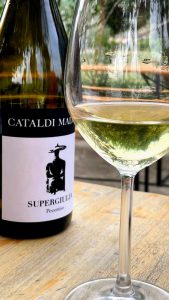 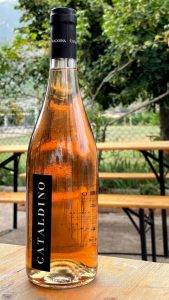 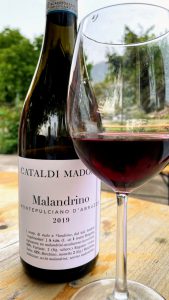 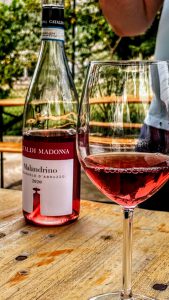 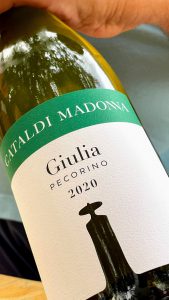 We do need a separate section on the Pecorino d’Abruzzo and the work the Cataldi family did on it.  After tasting a semi-unknown white grape cultivar in a garden store in 1990, Luigi is intrigued by the interesting acidity of the pecorino grape and chooses to put his efforts into growing it. He creates the first vintage of Pecorino in 1996, receiving many critics for using Pecorino (sounding like a small sheep) for naming the wine. Today might seem ridiculous, but at those times, wine wasn’t meant for normal people, but rather a product that could only be appreciated by nobles. As a result, you couldn’t give an ’embarrassing’ sheep-name but a fancy one.

If this grape is now one of the most popular white wines from Central Italy, it is largely thanks to the efforts of Luigi Cataldi Madonna, who was the first to rediscover it in the 1980s.

The hospitality is fantastic at Cataldi, we had the pleasure to stay with Pierluigi Menichetti (picture above). Sales Manager of the winery, he is perfectly embodied into the soul of the family and his knowledge & storytelling will make you fall in love. We had such a wonderful time. 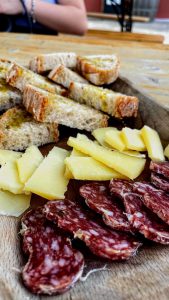 In summer you can take advantage of the outside area, instead in winter there is a little room inside where you can taste their wines.

This winery is 40m away from Santo Stefano di Sessanio, 17m from Navelli, 37m from Sulmona and 1h from L’Aquila.

Other Unknown Wineries of the Abruzzo Region

Abruzzo or Abruzzi? Abruzzy or Abruzzos? Which is the right name? Previous Article Why is Abruzzo also called the Greenest region in Europe? Next Article
Book Now
[]
We use cookies on our website to give you the most relevant experience by remembering your preferences and repeat visits. By clicking “Accept”, you consent to the use of ALL the cookies. However you may visit Cookie Settings to provide a controlled consent.
Cookie settingsACCEPT
Manage consent