A tour of Italy is not complete without visiting Abruzzo’s lush greenery and collection of superb Castles. The rich and colorful history of old Italy emanates through the walls of these historical Abruzzi attractions and sites with incredible views and experiences.

Read on for a mini-tour of sorts so you can get an idea of what to expect from our authentic tours that travellers are sure to love.

The local tour guides will fill you in on the interesting facts about these Castles and show you the best spots in the vicinity. It’s the best way to experience Abruzzo’s castles and forts full of extraordinary history. 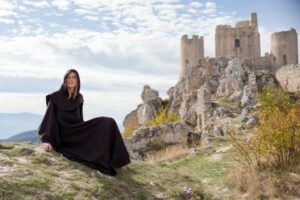 Perched 1460 meters high at the top of the L’Aquila territory, Rocca Calascio stands as one of the last 13th-century military fortresses in existence. It teleports you to the peak of grand medieval-era Italy. The beautiful scenery of the famed Navelli Plain and Tirino Valley territories are accessible here, granting you the best views from all sides of this castle. National Geographic named Rocca Calascio Castle one of the top 15 most beautiful castles in the world.

These exemplary views are in the acclaimed films Lady Hawke, The Name of the Rose, and The Journey of the Bride. After exploring, chill and sit back at some excellent bars at the town village below.

King Philip II of Habsburg of Spain once owned this extensive 25,000 square meter military fort, nowadays the largest fortress of Italy. It occupies the whole hilltop in the Teramo province. Overlooking a commanding view of the Kingdom of the Holy See and the Kingdom of Naples, it hosts several well-known public access history sites that make it one of the must-visit Abruzzo tourist attractions. Experience its arms square, military barracks, the Church of San Giacomo, the Governor’s Palace, and a collection of beautiful medieval cisterns. Before getting to sample the ceppe Civitellesi, a kind of hand-made pasta only found in this area, you can walk through the ‘Ruetta’ narrowest street of Italy.

The province of Chieti owns the 5th-century Castello Roccascalegna that stands with a slight upward edge proudly overlooking the Rio Secco and Sangro Valleys. The Lombards were the first to own this castle, and then later, the Swabians took over throughout the late medieval period.  It was abandoned later in the 18th century. However, successful restoration beginning in 1996 brought it back to form as one of the top Abruzzo tourist attractions.

The ancient Italian hamlet of Pacentro in Abruzzo is home to the Cantelmo-Caldora Castle. Built in the 12th century, the castle is famous for its monolithic towers used as a military complex in the medieval era, of which only three remain. Two of them are 25 and 27 meters tall, while the third is just 12 meters tall. The tallest one has a unique feature: it is carved with a portrait of a baron’s wife. It formed a defense front along with six other castles, including Anversa and Roccascale as well.

This fortress will soon open its turrets for public access, expanding its views of the towns and valleys that form its surrounding gorgeous landscape. The town full of shops and agriturismi are just nearby for additional side trips to complete your experience.

Having the distinction of being located below the Peligna Valley of L’Aquila province in the Popoli town area, this former military fort offers a breathtaking lower ground point of view of the town and the surrounding valley region. Although abandoned for many years, careful restoration in the 1990s brought it back to life. It is now a treasured site with popular feature exhibitions.

Among the collection of Abruzzo’s best attractions, Castello Piccolomini is the only residential castle in its ranks. It’s a well-kept secret of sorts that hosted several horror films for its historic charm and beautiful Gothic and Renaissance-era architectural design.  The castle’s dark history also sheds light on the darker aspects of human history and is a great attraction for many tourists that want to stay, eat or simply visit.

This historic site holds a monolithic tower with surrounding castle ruins. It was one of the 12th-century structures to host the Benedictine monastic community, after which the notorious Condottiero (a mercenary captain) Braccio da Montone wreaked havoc in the 15th century.  Local legends persist that the victims’ apparitions still haunt the place, especially the mysterious tower. The equally splendid Oratorio di San Pellegrino chapel, named  the Sistine Chapel of Abruzzo for its religious frescoes are very close to it and is a must visit in Abruzzo

This mini-tour discussion of Abruzzo’s castles ends on a high note with the famed Castello Ducale di Crecchio. It is also reportedly haunted by its history and none other than Duke De Riseis d’Aragona’s ghost himself. Despite early damage, restoration, and World War II bombings, it stands strong, already fortified with restoration and rebuilding efforts after that. Italy’s last monarch, King Vittorio Emanuele III, his wife, and his son stayed here.

Italian tours will bring you some of its famous sites and experiences. For seasoned travelers, they think they’ve seen and experienced all of Italy. For novice tourists, the standard tours are probably the only offerings they’ve seen.

Get ready for a more in-depth experience replete with its rich history, gorgeous panoramic landscapes, and beautiful remote towns. Take the best choice: our tour of these Abruzzo’s authentic experiences. Experience BellaVita can offer you the experiences of a lifetime.

Top 10 Places to Visit in Abruzzo Previous Article Di Cato Winery in Vittorito – Natural Wines of Abruzzo Next Article
Book Now
[]
We use cookies on our website to give you the most relevant experience by remembering your preferences and repeat visits. By clicking “Accept”, you consent to the use of ALL the cookies. However you may visit Cookie Settings to provide a controlled consent.
Cookie settingsACCEPT
Manage consent